“Just before his death Joseph Campbell was interviewed by Bill Moyers and that interview was later turned into the documentary, “The Power of Myth.” In this interview he postulated the idea that humanity was in need of new mythologies. Ones that were not rooted in the ancient world as all our current ones are. But myth’s that would help us navigate this new and strange world we are creating.”

The Myth Lab #9 process model that follows includes discovering an Artifact and mythic imprinting.  The goal is to integrate permaculture, transition, Nature and sustainability with the emerging values and struggles in the Chaos Age. Myth Lab is designed as an interactive, open source and iterative experience. One goal is clear: we need to build new values and myths to support new post-occupancy food and governance systems.

Artifact – The New Myth Artifact is a Nature-Human symbol; examples include graffiti, a bill board, film clip, and a permaculture garden, with special powers and messages to both present and future. 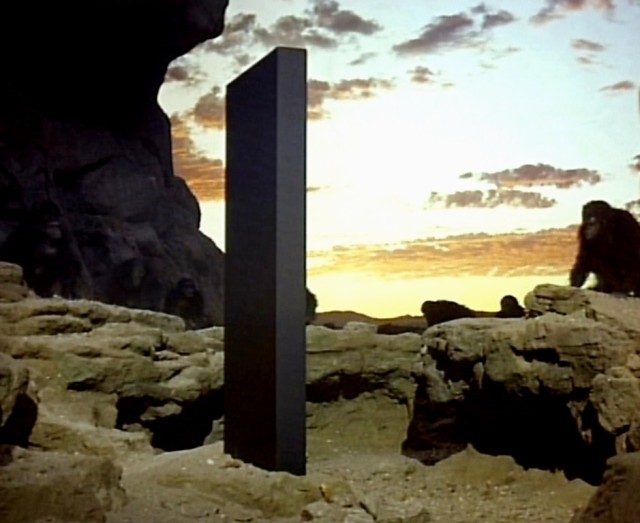 Monolith as Artifact for Myth Lab #9

Mythos – The pattern of basic values and attitudes of a people characteristically transmitted through myths and the arts. What is the mythos of the Post-Chaos Era?

New Mythology – Is a call for new Nature-based, globally integrated stories without allegiance to any classic mythologies. New Mythology incorporates new symbols, alchemy and rituals with an eye on the future.

The Transition Movement includes new business exchange schemes where waste is used by another business; garden sharing that allows neighbors to re-use barren land. The movement encourages people to choose local food, including support for smart transit and sharing / barter.

Mythic Imprinting – Imprinting is defined as a two-way interaction with a selected Artifact that has generates synergistic meaning for both creators and the reader. This iterative and transmutative process is grounded in the initiation, journey and hero work from Joseph Campbell and is one way that neighborhood artifacts can help participants generate new songs, poems and myths.

8 Key Elements in the New Mythology include:

1. Localization – back to sustainability and community; self-sufficiency

6. Para-Normal in conflict or characters 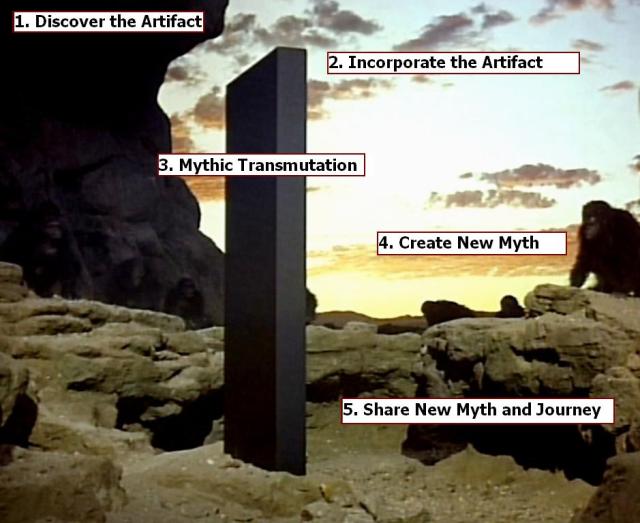 “Monoliths are fictional advanced machines built by an unseen extraterrestrial species that appear in Arthur C. Clarke’s Space Odyssey series of novels and films. During the series, three monoliths are discovered in the solar system by humans and it is revealed that thousands if not more were created throughout the solar system, although none are seen. The subsequent response of the characters to their discovery drives the plot of the series. It also influences the fictional history of the series, particularly by encouraging humankind to progress with technological development and space travel.

The first monolith appears in the beginning of the story, set in prehistoric times. It is discovered by a group of hominids, and somehow triggers a considerable shift in evolution, starting with the ability to use tools and weaponry.

The extraterrestrial species that built the monoliths is never described in much detail, but some knowledge of its existence is given to Dave Bowman after he is transported by the stargate to the “cosmic zoo”, as detailed in the novels 2001: A Space Odyssey and 2010: Odyssey Two. The existence of this species is only hypothesized by the rest of humanity, but it is obvious because the monolith was immediately identified as an artifact of non-human origin.

The extraterrestrial species that built the monoliths developed intergalactic travel millions or perhaps billions of years before the present time. In the novels, Clarke refers to them as the “Firstborn” (not to be confused with the identically-named race in Arthur C. Clarke’s and Stephen Baxter’s Time Odyssey Series) since they were quite possibly the first sentient species to possess a significant capability of interstellar travel. Members of this species explored the universe in the search of knowledge, and especially knowledge about other intelligent species.”

In Myth Lab #9, the tall smooth rectangle monolith from the film is transmuted into a 16’ tall crystal. Consider:

“Crystals and gemstones are living formations that have been growing in our earth since the beginning of time.  Considered highly sacred and powerful, these beings have been used since the dawn of ancient civilization.  These ancient crystals have been used as encoded tableture by the lemurian civilization which dates back 30,000 years.  Crystals then and crystals now are used as aids in physical, emotional, spiritual healing, spirit contact, psychic development, holistic healing, and a vast array of much more.  In working with crystals, you embark on a journey of rediscovering and healing your true, inner self.”

“The lands belonging to the gigantic continent of Lemuria included lands now under the Pacific Ocean as well as Hawaii, the Easter Islands, the Fiji Islands, Australia and New Zealand. Also lands in the Indian Ocean and Madagascar. The Eastern coast of Lemuria also extended to California and part of British Columbia in Canada.”

“An accidental discovery by an American research scientist has demonstrated that exposure to light dramatically increases conductivity of crystals. The approach, called ‘holographic memory’, could dramatically increase the memory capacity of computer chips. Quite by accident, Washington State University researchers have achieved a 400-fold increase in the electrical conductivity of a crystal simply by exposing it to light. The effect, which lasted for days after the light was turned off, could dramatically improve the performance of devices like computer chips. Holographic memory, could lead to huge increases in information capacity.”

Modern transmutation and alchemy are the same process. We are not “making gold.” Alchemy is an ancient process for changing states (higher, cooler, saner, more loving) and now plays a key role in elevating or destroying our global consciousness. The power of transmutation is available to all. Eco-alchemy is evident in severe changes in chemical, emotional, physical and spiritual changes in people and the landscape, especially in the effects of global warming, energy scarcity and war.

Consider the monolith in Kubrick’s film masterpiece 2001 A Space Odyssey. This artifact is highly mysterious, reactive, a huge change agent for uplifting the planet to a new consciousness. Key to Myth Lab #9 and New Myth #50 is analogy and our modern transmutation of the monolith. We can leverage, empower and transmute Kubrick’s idea by morphing it with a similar ideas:

The triangle in New Myth #50 is also transmutable like the monolith above. What is similar?

Renewed ritual of Light and triangulation 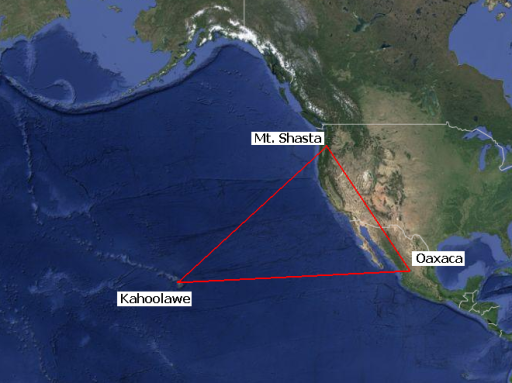 After Monsanto shot itself in the hay loft

After the GeoEngineers take away our Sun (to slow global warming)

After the remaining ice in the poles scream for life

3 crystal alchemists dance in the frequency

In 2066, most differences in culture of commercial regime and human survival world-wide were deconstructed, neutered. The exceptions were the places that developed and protected localized energy sources with HUGE fences before the collapse like solar, wind and wave technologies. Towns and farmlands alike were scraped clean-off and abandoned by the rich and their tumble weeds. All communities were fracked to death and sucked dry. Gas gone; coal is gone; Marshall Law stuck its bloody knife into our hearts by a corrupted United Nations.

Enter three locals, “light alchemists” as they later were called, from three very different histories and myths. They have the opportunity to connect up in a survival triangle with ancient technologies and modern day chutzpah.

Smith is a scavenger by profession – of things and memories, anything she can sell. A former Transition scout and current fence jumper who lives in a dripping nose cave at the foot of Black Butte. She found her 16’ tall crystal monolith unearthed in the remains of the former 2025’s trading post on old Jefferson Street after a recent crazy ass rain storm.

Ponder, 14 years old, is not your average post-apocalypse white bread artist. One of 7 children without parents (killed in the last Mexican civil war), who drives a tricycle taxi. She is a barter champ with dump stuff and runs the food forest with friends in a former heavy weight rural prison turned sustainable community near Monte Alban. Ponder found her Monolith in the cracked spire of a small village Catholic Church after an earthquake demolished the structure. 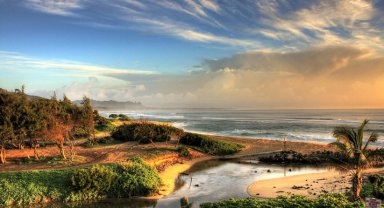 Bannish is a recent refuge from the States – after the global economic crash of 2055. She is an infamous storyteller, beach digger, seed saver and coconut tree visionary. She found her monolith in a sunken fishing boat near the harbor. Bannish thought it was unexploded ordinance. Not a bad guess?

The Glow in the Dark 3

Ponder sat in front of the tall crystal, mouth agape. It was pulsing up and down its mass, a soft yellow orangeish light, with the cadence of a yellow traffic light at 2 am. Dal’s monolith sparked to life at the same hour in her cave. She went to investigate some writing or symbols that were now revealed toward the base. Salli got the third call and tried to rub the symbols with parchment, like a tomb stone, to see what they could mean.

The three post-chaos explorers did not realize that all three monoliths were the same, exact duplicates. Instructions included. But they were not to discover each other until the monoliths were in “triangle” mode and charged with sun light and hieroglyphics. 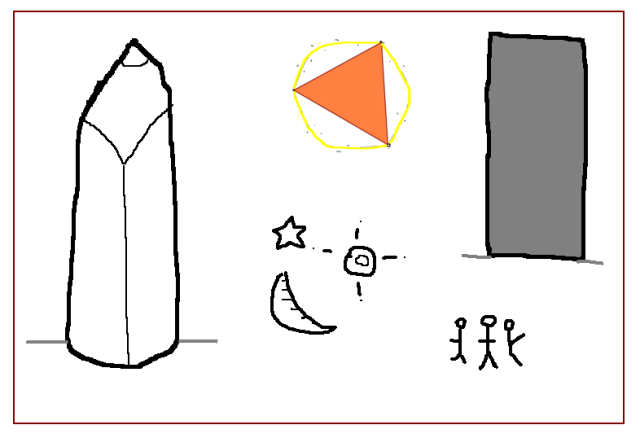 Hieroglyphics found on each monolith

In 2066, only a few had the ways and means to access data offline in what was formerly called the “internet.” The crew had only oral histories, books and their imaginations to decipher the simple glyphs on their crystal ‘liths.

Dal tried, with no luck, to barter the tall mono for booze and farming tools.

Then “event night” lit-up the crystals and the triad’s consciousness to a level never before believed by a human or Hominoid before or since.

Two solid beams of 7” light emanated from each of the crystal locations, arcing into the night sky in two different directions.

A crystal monolithic network is born.

Then another miracle. Each “crystalonaut” heard each other’s voice, a direct voice link x 3.

“Who is this?” cried Ponder!

“Dal X. Smith, Mt. Shasta Resilience Clan. Where are you?”

“Are the symbols on the base of your monolith glowing, guys?” cried out Dal.

How long is this connection gonna last? asked Dal.

Who else can see the beams?

What are the plans and expectations of the designers?

Send in your ideas to pscompub @ gmail.com to contribute to part two of New Myth #50!

The [open myth source] project gathers conversations, symbols, songs, visual art and stories. Building a house for Myth in the Sustainability Age.
View all posts by [ open myth source ] →
This entry was posted in Uncategorized. Bookmark the permalink.