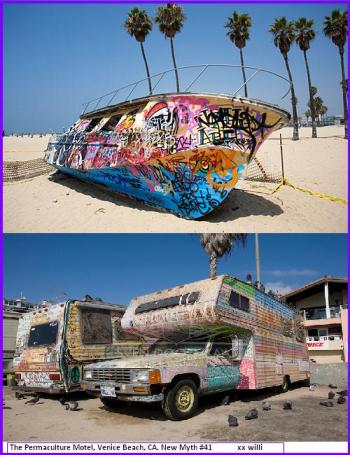 Down on Ocean Avenue, three blocks from the beach, waves a converted motel, really a Light Network Substation, an experiment sprouted by sun gods from the cool, wet lands of Cascadia. The “Permaculture Motel” as the locals call it, has a three-ring business plan, including: a SOCAL Seed Library and a Tool Lending Coop.

Nothing like the still smoldering take-over of the LA Metro power grid by the Asian box cutter mob in 2027 (and then multiple sustainability-hungry investors in Santa Monica) to spur some local innovation.

Sand dunes and tequila are the new Motel social media.

The electric Media Day tour bus from Culver City movie studios arrives each Friday at 11 am in a cloud of bumble squawk and stolen sun glasses. On the street, donation peddlers, punk rock drones are kicking up their cowboy boots and Telegraph tattoos.

80’s hair spray colors jump into building murals – cartoon people blending off the walls of Venice and into the streets like chameleons from last year’s Van’s catalog.  The alley way network is both clandestine and celebrated daily: meetings, back stoop BBQ’s – here is the yoga matt highway that cuts 90 degrees throughout the larger arteries of Transitioned Venice Beach.

Back to the four beached barges at ocean edge? This is Large; a kind of “moon landing in 2031.” The Barges are:

B – 1 – Food Forest with Compost Factory below (table and crop leftovers) + sea water and dirt from the neighborhoods. Growing the Food Forest on the backs of post-industrial wales

B -2 – Concert Stage / Dance Hall with housing below, the House Band are “The centering ones.” Moan and groan and make up cords from the old cargo hold.

B -3 – Skate Park with Recycle Works below. This is a nice synergy: staffers make repairs as soon as skaters break shit!

B – 4 – New Business Incubator above and classrooms below. The last start-up to emerge from the roost was a solar oven converts and stores electricity for moon shine brownies!

Hordes of greenies, trainees, travelers and transitionists are always streaming down from the LA valley cloud for a shot at a bunk and a plate. The Motel and its crew are like a 24/7 movie set buzz; a bee hive hum with a million futures.