Purpose of this Project:

We need to create new consciousness with the images and messages that we make.

Today’s children are super smart and have a great hunger for new stories and myths – to create and share them with other kids globally. So I am an advocate for creating new tools for kids:  sound bites or sound tracks, essays, stories. I have published 34 new myths using this sound, text, imagery, vision , alchemy and new myth frame work.

Images! Children are bombarded 24 hours a day. They need a need perspective or process to break the consumption drone. Something more personal and magical like the new alchemy which is a “change experience.” This model helps to redefine and illuminate new alchemies and proposes integrations in through several creative steps.

The act of working with this model (solo or in collaboration) is an alchemic act. Integrated output plus vision is the heart of the tool. The final format (pdf, avi, etc.) of the resulting artistic piece is of less significance.

The New Animation Model alchemy is driven by two stages  and the alchemic synergy between:

1.  Text, images and sounds and 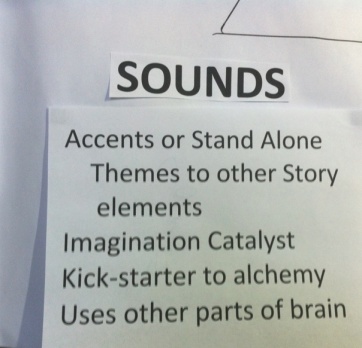 To me, sounds are the least understood but hold the highest alchemic potential for children’s creativity. As imagine connectors, sounds are the connection to past worlds and a future sonic glue. Children can create soundtracks and musical lattices for their own visions. Soon gone are the corporate jingles and processed top 40 hit making from the”old days?” 😉 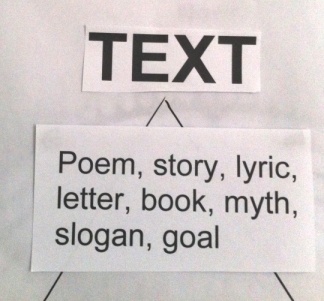 Perhaps the best understood, most rigid and traditional element for new animations, text are the quickest to deploy use in creative projects. As text / sub-text, credits, titles, etc., children can understand the meanings, placement and  legal function of labels and captions with little training. But letters, words and phrases are also doors to deeper meanings (i.e. – poetry) and alchemic in combination with the other elements.

Images are the third major component for alchemic recombination in this model.  Like text, images are also a rigid and machine controlled / traditional element for new animations. Images without sound can invite us to add our own inner voice or upload a soundtrack or over-power us with an historic or family references.

It is often interesting to watch a child playing a video game or listening to a tune. Where is the alchemic change in each? It could be argued that the more text, sound and image elements that kid has to brings to the  experience the better? The model speaks to an active creative process – not a reactive one. Commercial television with it’s 1950’s routines and soap operatic, brain numbing control is one counter-example to the goals of the animation model.

A child’s vision can be fueled by many things: heroes, memories, material wants, a global view or fear. This animation process can be key to both the start. middle or return stages of a journey to test the world and return home to tell the tale. Vision is best summed up as hope and a willingness to fight for your dreams. Joseph Campbell’s work is key here. 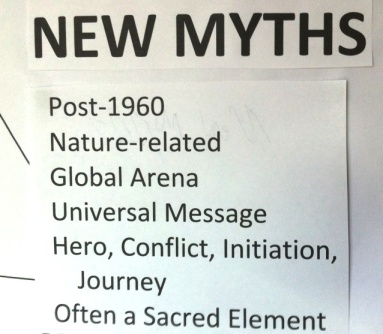 There is no more controversial piece of the model than the proposed resultant or the New Myths. And this comes with a multiple premises: including that the classic myths can longer stir our creativity and initiate our children’s journey. And two: there is a sacred symbol or ritual that binds all people together.

Case Study: The Edges of Nature

The ongoing momentum of state and federal marine conservation agencies geared toward preserving the Pescadero lagoon and preventing fish kills was determined to have paid off in early December.

Eighteen years ago, experts began to recognize a significant impediment at the lagoon winding under Highway 1 that resulted in the death of hundreds of steelhead trout. The population of steelhead trout has diminished from 600,000 in the 1980s to a scant 200,000, said Chuck Bonham, director of the California Department of Fish and Game. During yearly months of disconnect, the temperature of the lagoon rises and decreases oxygen levels in the water, affecting the procreation and resiliency of the native fish. As the fresh water rises above a layer of salt water, the water column begins to stratify and creates unsafe conditions for endangered and threatened coastal marine life.

Representatives from California State Parks, U.S. Fish and Wildlife Services, California Fish and Game and the National Oceanic and Atmospheric Administration are among the participating organizations. After receiving permits from the various government agencies, Patrick Rutten, a representative of the National Oceanic and Atmospheric Administration’s Restoration Center, put his plan to restore the lagoon into action Oct. 4.

Based on an appropriate tide schedule, the daytime breach occurred when the sunlight was at its highest and allowed photosynthesis to help raise the oxygen level in the water, Rutten said.

“For the first time since 2000, no fish kills occurred in the Pescadero lagoon following the breach of the sandbar,” said Jim Milbury, spokesman for the National Oceanic and Atmospheric Administration Fisheries.

Approximately 40 volunteers convened at the lagoon to begin the day-long process of manually breaching the 75-foot gap between the lagoon and the ocean. Using shovels, the volunteers were able to forge a channel allowing the warm fresh water and the cooler ocean water to mix. As expected, this effort was short-lived and the channel closed within a few days with nominal effect. After continuing to monitor the post-breach decreasing water quality in the lagoon, it was determined a second breach would be necessary, Rutten said.

Supported by the fraternal service organization the Native Sons of the Golden West, an excavator was rented to conduct a more substantial breach a few weeks later, Rutten said.

“It hurts our feelings when people say it’s only 200 or 500 steelhead dying [each year]; any fish kill is too much,” said Tim Frahm, Native Son of the Golden West member.

After six hours of excavating an extensive aqueduct, the lagoon breached significantly.

“We lowered the volume of the lagoon by a full ‘foot’ and created a channel that introduced cold, oxygenated seawater into the lagoon. The lagoon lowering also stopped water from flooding the marsh and tules, which prevented a water quality issue from setting up,” Rutten said.

This time, the channel lasted just more than a week and the water quality improved for a minimum of two weeks, Rutten said. By substantially lowering the water volume, Rutten and his colleagues “reset” the lagoon by decreasing the temperature and mixing the stratified water column with oxygenated water. Seemingly temporary, the breach essentially bought time until the lagoon naturally breached on Nov. 30, Rutten said.

“We had no fish kill and subsequent water quality monitoring indicated the lagoon had high quality steelhead conditions from the surface to the bottom,” Rutten said.

This timely success will likely have no direct impact on future years’ stratification and poor water quality in the lagoon. However, a permit has been issued for a third breach, fish kills have currently been prevented and information has been gathered that will assist in determining a long-term solution. A major factor in assuring continued support of the lagoon relies on the formation of an independent science panel.

“The science panel process is proceeding well. Dr. John Largier, University of California [Davis] Bodega Marine Lab, has volunteered to chair the science panel. John is a recognized expert in estuarine science and I have a high degree of confidence in John’s leadership and scientific expertise,” Rutten said.

The information gathered by monitoring the water quality that affects healthy estuary conditions before and after the breach, and eyewitness accounts of the variability in fish kills will be provided to the panel to govern future planning.

“We absolutely learned a lot about how we will conduct the 2013 breach. We did collect a substantial amount of water quality data that will be provided to the science panel,” Rutten said.

Perhaps just as significant as the physical results, was the ability for the various organizations to conquer the years of bureaucratic dissonance and get to work.

“From NOAA’s perspective, the breach was an absolute success,” Rutten said. “This was the first ‘management’ effort in 18 years to prevent a fish kill and it worked.” 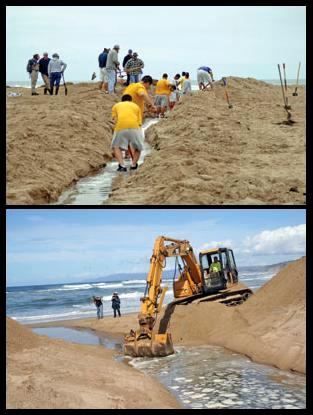 The [open myth source] project gathers conversations, symbols, songs, visual art and stories. Building a house for Myth in the Sustainability Age.
View all posts by [ open myth source ] →
This entry was posted in Uncategorized. Bookmark the permalink.